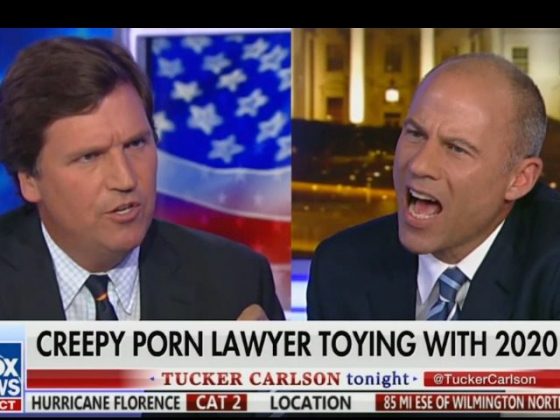 I have an extremely low opinion of attorney Michael Avenatti – especially when it comes to how he is treating Tucker Carlson. He’s the lowest of bottom feeders and a true scumbag. Leave it to that dirtbag to pounce on Carlson when he is targeted by the communist left.

Just recently, violent Antifa thugs descended on Tucker’s DC home and mobbed it. They chanted outside and threatened Carlson and his family. One of them spoke of a pipe bomb and they cracked his front door while Tucker’s wife hid in a pantry until police could get there. They defaced his driveway and car as well. Thankfully, none of Tucker’s four children were there at the time. The police are treating it as a hate crime but I don’t think anyone has been arrested over it. I doubt they will be. It is DC after all.

Antifa chanted, “Tucker Carlson, we will fight. We know where you sleep at night.” “No borders! No walls! No USA at all!” the protesters chanted in another video posted to Twitter. “Tucker Carlson, you cannot hide from the people you hurt with your rhetoric, your lies, and your hate,” the group wrote on Twitter, adding the hashtag “#KnockKnockTucker.” Antifa also doxxed Carlson and his family on Twitter.

Now, it’s coming to light that last month Tucker Carlson went to a Virginia restaurant with his wife, son, and daughter. His daughter went to the bathroom with a friend and returned sobbing. She left the restaurant. Her brother went and confronted a man who called her a ‘whore’ and a ‘c*nt’. The brother threw a glass of red wine on the guy. The sleaze just happened to be Latino and gay, which should have been beside the point, but that’s what Avenatti and the left focused on. They twisted the awful confrontation into somehow being Carlson’s fault and falsely accused him of assault. I’m beyond disgusted by this.

This is the full statement by Tucker Carlson in response to Michael Avenatti:

On October 13, I had dinner with two of my children and some family friends at the Farmington Country Club in Charlottesville, Virginia. Toward the end of the meal, my 19-year-old daughter went to the bathroom with a friend. On their way back through the bar, a middle-aged man stopped my daughter and asked if she was sitting with Tucker Carlson. My daughter had never seen the man before. She answered: “That’s my dad,” and pointed to me. The man responded, “Are you Tucker’s whore?’ He then called her a ‘f**king c**t.”

My daughter returned to the table in tears. She soon left the table and the club. My son, who is also a student, went into the bar to confront the man. I followed. My son asked the man if he’d called his sister a ‘wh**e’ and a ‘c**t.’ The man admitted he had, and again became profane. My son threw a glass of red wine in the man’s face and told him to leave the bar, which he soon did.

Immediately after the incident, I described these events to the management of the Farmington Country Club. The club spent more than three weeks investigating the incident. Last week, they revoked the man’s membership and threw him out of the club.

I love my children. It took enormous self-control not to beat the man with a chair, which is what I wanted to do. I think any father can understand the overwhelming rage and shock that I felt seeing my teenage daughter attacked by a stranger. But I restrained myself. I did not assault this man, and neither did my son. That is a lie. Nor did I know the man was gay or Latino, not that it would have mattered. What happened on October 13 has nothing to do with identity politics. It was a grotesque violation of decency. I’ve never seen anything like it in my life.

2/3 – and battery (on video). You are the aggressor in the video as is your friend. The man at the bar sits there calmly. Numerous witnesses contradict your claim of innocence. Your daughter was drinking underage in a bar with your assistance and knowledge. You were intoxicated.

3/3 – You told the man to “go back where you came from” before the video starts. And if you were so innocent, why didn’t you disclose it weeks ago as you recently did in connection with the protest at your home?

Tucker Carlson is letting Avenatti have it with both barrels after he accused his son and himself of assaulting the guy. The media is shamelessly running with it and spinning it as a smear against Tucker. It’s deplorable and deeply evil. What father out there wouldn’t want to clean the clock of some jerk who says something like that to his daughter? What brother wouldn’t confront a slug like this? I’m a woman and if that had been my daughter, that guy would have regretted his words and fast.

Avenatti, the celebrity attorney of porn star Stormy Daniels, posted a video on Saturday showing Carlson appearing to say “get the f**k out of here” to another man in a heated exchange. So freaking what? Then the sharky attorney accused Carlson of “assault on a gay Latino immigrant” named Juan in the heated exchange. Throwing wine on someone in my book is not assault… it’s a dry cleaning bill. Regardless, Avenatti was not there and has no idea what really transpired. He just has the word of this reprobate. Tucker did not do anything to the guy… it was his son who threw the wine… and the guy deserved it.

Tucker’s daughter was viciously attacked like this simply because he’s her father and this guy does not agree with him politically. There is no excuse for this kind of behavior. But Avenatti doubled down with his dirty lies… he posted anonymous statements that he claims were written by witnesses to the event.

One friend of the instigator ‘Juan’ stated that after Carlson’s son had splashed wine in Juan’s face: “I saw Juan retaliate to the assault by the same means (throwing a glass of wine at him). Immediately after that, I saw Mr. Tucker Carlson get very close to Juan’s face and say, “Get the f**k out of here” multiple times.” I repeat, so what? “Throughout this exchange, I heard Juan respond repeatedly, “I’m not going to get out of here, I live here.'”

Another so-called witness statement provided by Avenatti denied that Juan had called Carlson’s 19-year-old daughter a ‘whore’ or a ‘c*nt’, or that he spoke with her at all prior to being accused of doing so. You know that is a flat out lie. Avenatti also accused Tucker of being drunk. Neat trick considering Tucker quit drinking 16 years ago. I’d sue this guy for defamation of character if I were Carlson. The celebrity lawyer also accused Carlson of letting his 19-year-old daughter drink wine at the country club. Carlson’s only son is 21.

Tucker Carlson wanted to keep the confrontation quiet for his family’s sake. But Avenatti just had to air it and spread lies over it. Let this bottom feeder investigate all he wants… there’s nothing to find on the incident except it was harassment against the Carlsons and should never have happened.

1/2 – We are investigating an alleged assault on a gay latino immigrant committed by T. Carlson and/or members of his inner circle at a club in VA in Oct. It likely includes underage drinking in violation of VA law. Link to a portion of the incident:https://t.co/QcbCRHrplP

The country club revoked the membership of the man accused of verbally accosting Tucker Carlson’s teenage daughter last month. That at least is good news.

Leftists are madly defending not only Antifa but the gay Latino thug who attacked Tucker Carlson as well. I don’t always agree with Carlson, but he’s not a homophobe or a racist. He does not deserve to be treated this way simply because he has a different political view than the communists do.