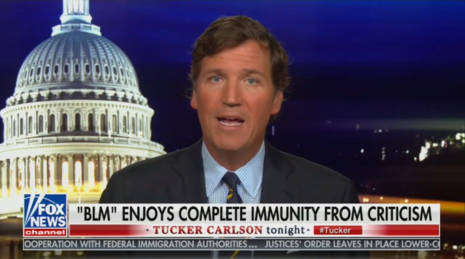 In the face of recent announcements from companies dropping their ads from his show, Fox News Channel’s Tucker Carlson was unfazed by the liberal thought police as he delivered a 17-minute-plus opening monologue Monday night speaking truth to the power of the Black Lives Matter movement. He called out their bullying tactics, manipulation of our moral values, and the brutalization of anyone who even offered mild criticism of the group.

At one point, speaking about the normal rules of our political system, Carlson noted that “Black Lives Matter wants to run the country, therefore, you can freely criticize Black Lives Matter.” “If the leaders of Black Lives Matter are political actors, and they are, then by definition you are allowed to have any opinion you want to have about them,” he said before ominously arguing that the rules had been changed.

“Imagine a world where you are punished for questioning the behavior of the president or for insulting your local mayor. You probably can’t imagine that. It’s too bizarre. It’s un-American. But that’s where we are right now,” he warned. “You can be fired from your job if you disobey. Many Americans have been.”

And he had evidence, people who had lost their jobs and called racist for offering just mild criticism of the group and their tactics (click “expand”):

On Friday, for example, the principle of a public school in Windsor, Vermont was dismissed from her job for posting the following words on her personal Facebook page. Quote, “While I understand the urgency to feel compelled to advocate for black lives, what about our fellow law enforcement? Just because I don’t walk around with a BLM sign, should not mean I’m a racist.” End quote.

Unfortunately, the principal’s boss disagreed. The superintendent of Windsor schools describe the quote you just heard as, quote, “Outright racist.” Windsor, Vermont, by the way, is more than 97 percent white.

Also on Friday, an economist called Harald Uhlig lost his job at the Federal Reserve Bank ok Chicago for daring to offer milder criticism that that. On Twitter, Uhlig noted that Black Lives Matter had, quote, “just torpedoed itself, with its full-fledged supportive #DefundThePolice.” Now is the time, Uhlig, noted, quote, “for sensible adults to enter back into the room and have serious, earnest, respectful conversations about it all.”

That was a racist statement, the Federal Reserve concluded, so they fired Harold Uhlig. We can give you many other examples of the same thing happening. There are a lot of them.

While many liberals (who likely had never watched his show) were calling him racist for his criticism of Black Lives Matter, Carlson expounded on a simple truth: “Yes, black lives do matter, that is a statement of fact and no decent person doubts that is true because it is.”

He went on to preach that virtue by noting that we all were children of God:

And it is true precisely because every life matters. We are all human beings, every one of us. We have souls, skin color is irrelevant to moral value.  Until recently, this was considered obvious. Saying it was regarded as a virtue. All lives matter equally. All of us were created by God. And in the end, all of us will die. Nothing can change that, not wealth, not fame, not race. Every life is precisely as valuable as every other life.

“By the way, that idea forms the basis of the Christian faith. It’s the entire premise behind our founding documents,” he recalled. “And yet, suddenly, thanks to Black Lives Matter, you can no longer say it out loud. Affirming the fundamental equality of all people is now considered hate speech.”

Further noting that we’re in “a dangerous moment” and that BLM’s policy demands had seen a surge in support, Carlson urged: “If you strongly disagree with something, say so. Otherwise, it’s much more likely to happen.”

TUCKER CARLSON: It is all pretty strange when you think about it. If the leaders of Black Lives Matter are political actors, and they are, then by definition you are allowed to have any opinion you want to have about them. Black Lives Matter wants to run the country, therefore, you can freely criticize Black Lives Matter. Those are the rules of our system, but not anymore.

…This is a dangerous moment. How did we get here? In a word: quickly. It happened fast. As recently as December before the riots, most Americans did not approve of Black Lives Matter. The group was defined in the public mind by moments like this.

CARLSON: Pigs in a blanket fry like bacon. Kill the police. They yelled that at a rally. The usual layers immediately swooped in to pretend it had never happened. The president of the Southern Property Law Center wrote an entire op-ed ordering the public not to consider Lack Lives Matter a hate group.

But people could see the truth for themselves, the video was online. A lot of facts about Black Lives Matter still reside on the internet. They have not yet been scrubbed.

The group’s signature demand is to eliminate law enforcement. When you first heard protesters scream “Defund the police” it may have shocked you. ‘That’s just crazy,’ you may have thought. A few weeks later, support for eliminating law enforcement is rising quickly in the polls. Minneapolis is already doing it. Other cities will follow.

Are you surprised? Almost no one in public life has pushed back meaningfully against the idea of defining the police. The Black Lives Matter position is the only position most people here. After a while, they believe it. Unchallenged claims must be true. That’s what most people assume and why wouldn’t they assume that? If you strongly disagree with something, say so. Otherwise, it’s much more likely to happen.

About Jeffrey A. Friedberg, A VIEW FROM THE STREET: Quick, impolite, and to the point.... 501 Articles
A VIEW FROM THE STREET: What Does This 79-year-old Ex-Warrior Still ThinK? - "...I hate every political system on Earth. I have no time for any politician, ruler, faked bullshit Cause, or religion. And I loathe any lying Media SOB that assists them to enslave Humanity. They can all go to hell...it's only when 'civilization,' cities, and religion, or 'science,' are imposed upon Humanity that nothing makes sense and worlds go haywire. The ultimate goal of civilizations---its rulers, priests, and power elites---has always been to divide us, conquer, and rule over us and our human independence...in the end...only the State or its State religion will rule." (Published, 2012, "RED WHITE AND DEAD AGAIN," A thriller book, by Jeffrey A. Friedberg, 2012.)
Website Twitter LinkedIn

Do the Progressives really think that this extreme Trump Derangement Syndrome will win hearts and minds? Is this the first guest who’s been too obnoxious even for Tucker Carlson, who always seems rather charmingly amused and befuddled by the more extreme Trump haters?

Hollywood has screwed up so much in their war against President Donald Trump that they’re dying for relevancy. Furthermore, since all efforts to destroy President Trump have failed, Hollywood in collaboration with former Obama officials have created a website full of propaganda, the endgame of which is to destroy POTUS45. [Read More]