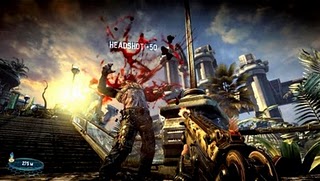 By T.F. Stern via The Noisy Room

Here we go again, another extremely violent video game to shock the public with graphic mutilations and sexual implications; Bulletstorm takes gaming to another level of brutality. Bulletstorm promises to reward player’s ability to mutilate, destroy or sexually assault victims in the most graphic realism possible with today’s computers. The new game is set for release in the US on February 22nd following certain problems with Germany’s prudish view of modern gaming.

“EA acknowledged the censorship by German advisory board USK, explaining that the country censors many video games, a policy the publisher disagrees with.”

The game’s intended for “adult/mature” use (Exactly what definition of adult/mature covers mutilation and sexual assault are gamers using? Just a thought.), however nothing prevents younger folks from entering the arena. How demented do you have to be to participate in a game where someone gets their entrails exploded all over the place? What does having such a game available to any section of our populace say about our society?

There was a quotation in the article which caught my attention, even more than my inability to appreciate the degenerate nature of the game. Pay close attention to the prevarication as it hints at the level of depravity our nation has sunk to.

“The primary difference why other countries can outright ban certain types of games, music, movies and even books is simply because they don’t have a First Amendment in place,” said Hal Halpin, the president of consumer advocacy group ECA. “Controlled substances such as alcohol and tobacco are merchandised differently primarily because they’re ingested or absorbed and the chemicals cross the blood-brain barrier. Movies, music and video game are First Amendment-protected free speech.”

Did you catch that? According to somebody’s twisted interpretation of the 1st Amendment, a God-given inalienable right covers intent to murder, rape, mutilate and otherwise destroy human forms. It doesn’t matter if it’s a game or for real; the thought process involved remains the same. Halpin, (and the Supreme Court), are suggesting God, the Eternal Father, has authorized mankind to partake of that which previously had been labeled sinful.