Does art imitate life or does life imitate art? Here’s one instance where one man’s courage and artistry affected life so strongly that even all the powers of a totalitarian government failed to suppress its brilliant light. Anti-Stalinist poet Yevgenny Yevtushenko, who passed away at the age of 84 in Tulsa, Oklahoma, where he was a professor who split his time between the United States and Moscow.

Yevtushenko was a poet with rock star fame in his native Russia, famous for his poems attacking Stalin and the Soviet system. He was expelled from the Literary Institute for”individualism in 1957 and banned from traveling, but that simply added to his mystique and appeal.

In 1961,Yevtushenko visited a large ravine just outside the Ukrainian capitol of Kiev called Babi Yar. It was being used as a trash dump. But 20 years previously, it had a very different use.

Babi Yar then was one of the great killing grounds of the Holocaust. At the end of September in 1941, the Nazis, with the cheerful assistance of Ukrainian ‘Blue’ police rounded up 33,741 Jewish men, women and children who lived in Kiev, and made them strip naked. Then they forced them into the ravine and machine gunned them to death in one mass grave. 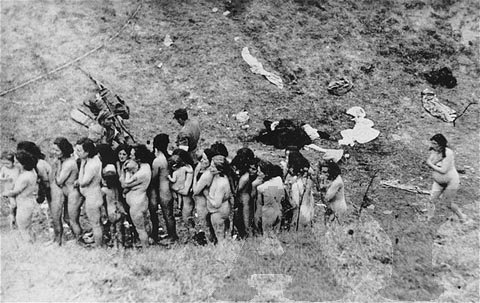 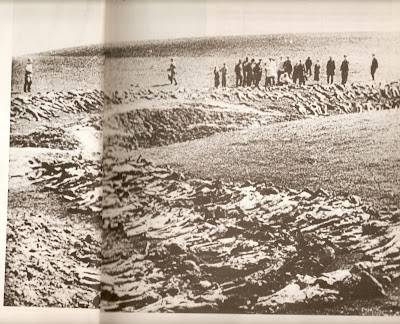 While the killing was going on, many of the Jews’ Ukrainian neighbors looked on, enjoyed the show and applauded as their neighbors were murdered. Many of them even brought picnic lunches.

During the course of the Holocaust, the ravine became a popular spot. Over 96,000 Jews ended up being slaughtered in that bloody, pitiless killing ground.

Babi Yar was important because it was the first major action of Hitler’s Einsatzgruppen. The Einsatzgruppen were groups of elite SS men who were literally killing units charged with murdering every Jew they could find. In the Ukraine, as elsewhere, their job was made much easier by the assistance of the locals.

The Soviet Union’s official policy when Yevtushenko visited Babi Yar in 1961 was not to discuss the Holocaust at all, but to consider everyone who fell in what they called the Great Patriotic War ‘Soviet citizens.’ Aside from the fact that the Soviets didn’t have all that much use for Jews themselves, there was also the factor of the Ukraine’s role in the Holocaust to consider. And they were by no means alone in the territories the Soviets then had control of.

Yevtushenko was outraged that a place where so many innocent people had been murdered was not even given a memorial, and that their graves were literally a place where trash was being thrown. He was angry at the Soviet Union’s continued silence on the Holocaust and its perpetrators for the sake of the Evil Empire’s unity. So he did what only a poet could to strike back. He wrote one of the most famous poems of the 20th century,“Babi Yar.”.

It’s a startling poem even today, wherein a non-Jew suddenly metamorphoses himself as the incarnation on the entire Jewish race:

“No monument stands over Babi Yar.
A steep cliff only, like the rudest headstone.
I am afraid.
Today, I am as old
As the entire Jewish race itself.

I see myself an ancient Israelite.
I wander o’er the roads of ancient Egypt
And here, upon the cross, I perish, tortured
And even now, I bear the marks of nails.

It seems to me that Dreyfus is myself. *1*
The Philistines betrayed me – and now judge.
I’m in a cage. Surrounded and trapped,
I’m persecuted, spat on, slandered, and
The dainty dollies in their Brussels frills
Squeal, as they stab umbrellas at my face.

I see myself a boy in Belostok *2*
Blood spills, and runs upon the floors,
The chiefs of bar and pub rage unimpeded
And reek of vodka and of onion, half and half.

I’m thrown back by a boot, I have no strength left,
In vain I beg the rabble of pogrom,
To jeers of “Kill the Jews, and save our Russia!”
My mother’s being beaten by a clerk.”

When Yevtushenko finished it, he knew what a bombshell it was and was fully aware of the consequences of airing it…especially with a Premier of Ukrainian extraction, Nikita Khrushchev leader the Soviet Union at the time. His publisher at “Literaturnaya Gazeta” first cautioned him against publishing the poem and told him that ‘If I publish it, I will likely lose my job and who knows what will happen to you.’ When Yevtushenko insisted, the publisher complied…and lost his job. The poem became a huge success in Russia and in the West, where copies were smuggled out. Yevtushenko was not punished formally, since Krushchev was still trying to promote the myth of the anti-Stalinist ‘thaw,’ because Yevtushenko was astute enough to moderate his original version of the poem to praise Russia at the end, and because he had become far too well-known and popular. But his original restrictions remained in place

“The poem was a criticism of anti-Semitism worldwide, including Soviet anti-Semitism, and was against all kinds of racism,” said Yevtushenko in a 2011 interview with the BBC.

“I was not afraid because I had already been expelled from the Literary Institute; I had been expelled from all kinds of organizations,” said Yevtushenko. “And I believed there was a future of change for Russia, that was also important. The poem was one of the changes; it was one first hole in the Iron Curtain.”

Indeed it was. And it eventually affected Russian attitudes towards Jews and the Holocaust, with many of Yevtushenko’s fellow artists producing works on that theme. ‘Babi Yar’ and its response helped inspire them with the intellectual courage to speak out.

The Soviet Union refused to put a memorial on Babi Yar until 1976, when an official memorial to ‘Soviet citizens’ shot at Babi Yar was erected. And finally, in 1991 the Ukrainian government allowed the establishment of a separate memorial specifically identifying most of the victims as Jewish.

That came after the first president of independent Ukraine, Leonid Kravchuk, made a fiery speech at the site. he was the first prominent Ukrainian who actually admitted publicly that Ukrainians shared some responsibility for carrying out the massacre, something that evoked a decidedly mixed response among his countrymen.

There’s an interesting postscript. In 2009, the Kiev city council decided that Babi Yar was an ideal site for a tourist hotel to service the expected trade for the 2012 European soccer championship. The original plans actually called for the place to be called the Hotel Babi Yar, believe it or not.

Fortunately, there is a happy ending to this sordid story. After the plans leaked out, widespread outrage from around the world caused the city’s mayor, Leonid Chernovetsky to veto the plan. I don’t doubt that took considerable courage on his part.

After all, this is a country where mass murderer and anti-Semite Bohdan Chmielicki is still regarded as a national hero, memorialized with a statue in the middle of Kiev.

Well, time passes for all things, and that is how it should be. But there are things we need to remember, simply to make sure they don’t occur again.

There have been some very recent and public attempts to pave over history or deny it ever happened in the first place. Seeing that, I think that remembering is a more pressing need for human society just now than another spiffy new hotel. Not so much just to memorialize the dead, as to help save the living.

I think Yevtushenko instinctively understood that.

March 3, 2017 1willford Politics Comments Off on Washington Post: The Story That Wasn’t

By: Mike McDaniel    The breathless headlines leapt off the page on Thursday, March 2. Attorney Jeff Sessions had contact with Russians! Sessions lied about it! The usual mindless politicians like Nancy Pelosi demanded Sessions resign. And it was all pushed by The Washington Post, whose own story disproved its report.  The Post’s Headline: [Read More]

The Government Shutdown, Democrat anti-Semites, and a mad, bad media

January 26, 2019 Bookworm Politics Comments Off on The Government Shutdown, Democrat anti-Semites, and a mad, bad media

The government shutdown, anti-Semitism in the Democrat Party, abortion, and a mad, bad media — no matter I busy my day is, I must blog about them. Did you know that a chicken without a head made it into an early edition of Ripley’s Believe It or Not? It’s true. [Read More]

February 12, 2018 Puma ByDesign Weasel Watching Comments Off on Common Cause

Vassar Bushmills Q: Has America had any enemy or antagonist since World War II which the Democratic Party has NOT made common cause with? To make “Common cause” generally means “to unite one’s interest with another’s” and since the 1970s the term has been associated with a liberal leaning political group [Read More]